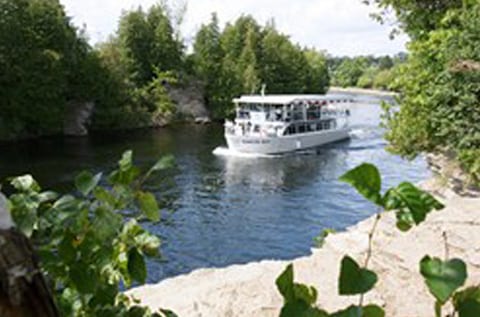 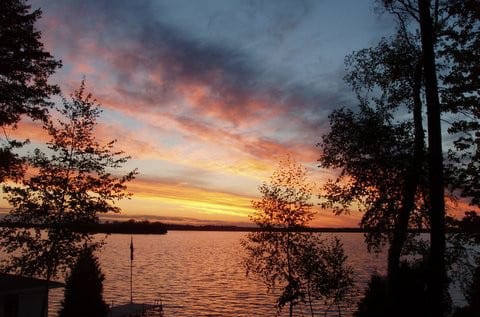 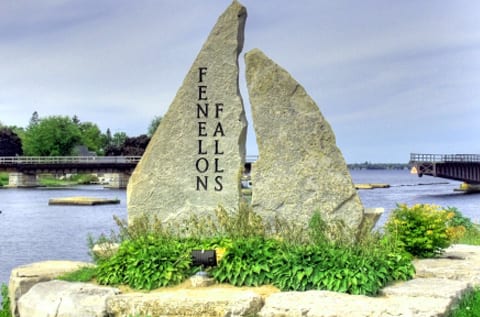 The canal starts passes through typical southern Ontario farm country with bedrock covered by glacial sands and gravel, and rapidly rises into rugged Canadian Shield with rocky outcrops exposed as they were left by the Ice Age 12,000 years ago covered only by boreal forest. After each spring thaw, the Waterway's historic locks and canals open, linking a passageway so magnificent it has been named "one of the finest interconnected systems of navigation in the world". Those who visit, reminisce long after leaving. They can't help but remember the impressive locks and lofty legends that make up one of Canada's most spectacular waterways. As many as 6,500 vessels pass throught the popular lock #34 at Fenelon Falls in just one season.

There are a total of 44 locks, including the first and second highest lift locks on the world, 2 flight locks and one marine railway. It took 87 years to complete, from 1833, when the first lock was constructed, until the final leg of the system opened in 1920. 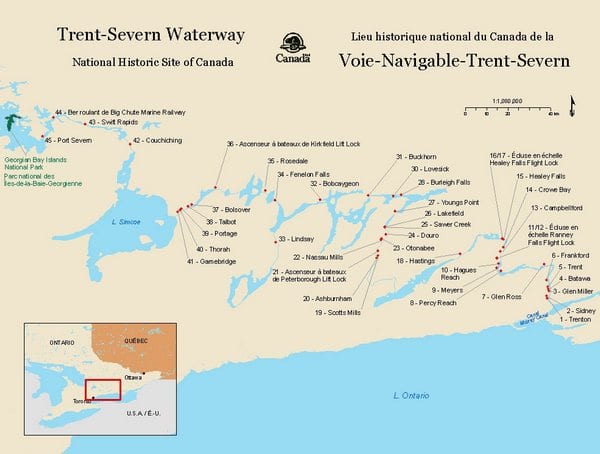 The Waterway is made up of a number of interconnected lakes, rivers, canals and cuts. Since many of these waters are at varying elevations, a series of locks were built to allow vessels to transit the system from end to end. In fact, boats transiting from Lake Ontario are raised 596 feet (182m) to the summit at Balsam Lake and then decent 262 feet (80m) down to Georgian Bay. There are 53 km of man-made channels 6 to 8 feet deep comprising what is considered by most, the Trent Canal portion. The balance are lakes and rivers that flow North West to Georgian Bay and South East to Lake Ontario from the Waterway's high point at Balsam

Initially, the first elements of the system were dams and locks, built to accommodate water powered mills and the movement of timbers cut by local logging companies. As time passed, pressure was mounted to join various sections of the future waterway. Over many years, these efforts saw only limited success. Ultimately, the increasing populations of the various districts saw their influence contribute to it's completion.

Overview of the Canal to Balsam Lake


The Trent Severn Canal begins on Lake Ontario at Trenton (161 km east of Toronto and 96 km west of Kingston), but is only useful for most boats because of the 1880 Murray Canal which connects Lake Ontario to the Bay of Quinte, and effectively makes the scenic Prince Edward County an island. The 92 km (56 mile) stretch form Trenton to the eastern end of Rice Lake climbs 112 m (267 feet) through 18 locks. An interesting spot 6 km (4 miles) north of Trenton is a boulder the size of a house at Glen Miller, which was left behind by the retreating glaciers. Along the lower Trent you can observe the Petergorough Drumlin Field, where 3,000 teardrop shaped glacial hills are spread over 7770 square kilometres (3000 square miles). Some of these drumlins rise 45 metres (150 ft) and stretch over 1.5 km (1 mile) long, with the highest point showing the direction of glacial advance. At Percy Reach there was a salt spring, where settlers extracted and evaporated water.

Rice Lake is the second largest lake on the Trent-Severn system, is named for the rice crop harvested by the Indians. The rice plants grew over a metre (3 ft) above the water and were prized by early settlers. Changing water levels and the introduction of carp to the lake ended the rice crops many years ago.

From Rice Lake, the Otanabee River takes you to Peterboroguh and then on to Lakefield. Peterbrough has what was once the largest hydraulic lift lock in the world, climibing 20 metres (65 ft). Boats enter the upper and lower chambers at the same time, and the top one is filled with slightly more water, so as one lock drops by gravity, the other is lifted by hydraulic pressure. Above the lift lock is the Peterborough Centennial Museum and Archives which has a scale model of the entire Trent-Severn canal. The canal passes by Trent University, chartered in 1962 and featuring very unique buildings.

Above Peterborough, at Lakefield you enter into the Kawartha Lakes system, passing through Katchiwano, Clear, Stony, Lovesick, Buckhorn, Chemong, Pigeon and Sturgeon Lakes. At the north shore of the eastern end of Stony Lake are ancient petroglyphs on a limestone outcrop, first discovered in 1954 by geologists flying over the area while exploring for minerals, and a road was built to the petroglyphs in 1968 making them accessible to all. The town of Bobcaygeon's name is derived from the Indian name for the rapids, bob cajwin (narrow pace between two rocks where water rushes through), and attracted sawmills in it s early days, a canal lock in 1833, and today is a major tourist hub

From the southern end of Sturgeon Lake you can detour south to Lindsay and Scugog Lake, though it was only a marsh until a dam built by an 1834 mill made it navigable. Part of the 16 km (10 mi) long island in the lake is an Indian reserve granted to the Misissaugas, and the southern tip is marshland with great bird watching. The town of Lindsay was important as the northern terminus of the railway from Port Hope on Lake Ontario.

From Sturgeon Lake you pass Fenelon Falls, and travel across Cameron, Balsam, and Mitchell Lakes before using the 1907 Kirkfield Hydraulic Lift Lock, and then across Canal Lake and 5 more locks to drop down to Lake Simcoe level. On a farm near Kirkfield, is the 149 birthplace of William Mackenzie, who worked as a school teacher and lumber man before helping to build the Canadian Northern Railway, for which he was knighted. William Mackenzie owned a large cottage on the west shore of Balsam Lake know as Mackenzie Point. A little further up the shore line is the picturesque Kawartha Lakes region, Balsam Lake Provincial Park which is an all-season recreational park. In summer, swim at a clean, safe beach, hike to a lookout tower, fish for bass, sail and windsurf. Come in spring for wildflowers and in October for autumn glory